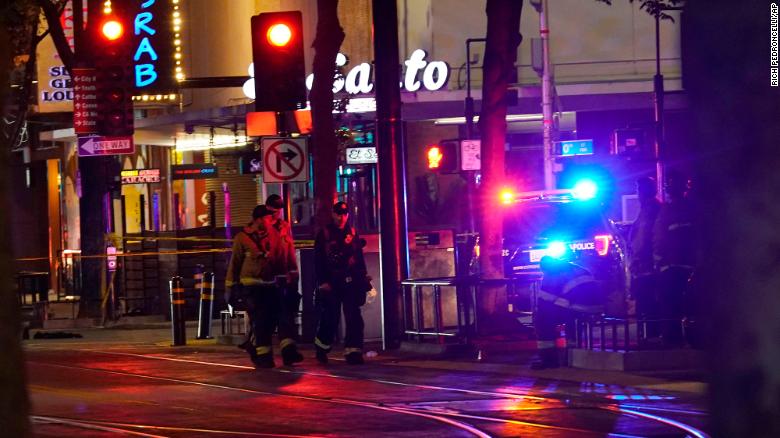 Police on Monday said they have arrested one man who is a suspect in Sunday’s mass shooting in Sacramento that killed six people and wounded 12 others.

Dandrae Martin, 26, was identified as a “related suspect” and was booked on assault and illegal firearm possession charges, according to a release from Sacramento police.

CNN is seeking comment from legal representation for Martin. He is scheduled to appear in court Tuesday at 3 p.m. PT (6 p.m. ET).

During the initial investigation, detectives found more than 100 shell casings and discovered at least three buildings and three cars that had been hit by bullets.

“There were a lot of shots fired that night, and hence the complexity of the investigation,” police Chief Katherine Lester told CNN affiliate KCRA.

Lester said Sunday there were multiple shooters and a large fight occurred before the gunfire.

District Attorney Anne Marie Schubert said in a statement that Martin has not been arrested for any homicide in the incident.

“The investigation is highly complex involving many witnesses, videos of numerous types and significant physical evidence,” Schubert said. “This is an ongoing investigation and we anticipate more arrests in this case.” The prosecutor would not comment on specifics.

Police served search warrants at three homes and at least one handgun was recovered. Authorities said they have received more than 100 video or photo files in a tip portal.

The Sacramento County Coroner’s Office on Monday identified the six victims who died:

The tragedy has devastated the victims’ families, confounded the community and angered those who are frustrated by yet another mass shooting.

“My son was a very vivacious young man,” Harris’ mother Pamela Harris told CNN affiliate KOVR. She said her son smiled all the time and never bothered anyone.

“And for this to happen, it’s crazy,” she said. “And I’m just to the point right now (where) I don’t know what to do. I don’t even think this is real.”

State Attorney General Rob Bonta urged the public to come forward with any information about the shooting.

“Enough is enough. The sickening gun violence plaguing our communities must end,” he said.

“There have been about as many mass shootings in America as days so far in 2022. My office continues our work to get illegal guns off our streets, hold those responsible for gun violence accountable, and push for — and defend in court — commonsense gun laws. This work is urgent. We must act now.”

The incident was the second mass shooting in Sacramento in the past five weeks. On February 28, a man fatally shot three of his children and another man at a church. The gunman took his own life, authorities said.