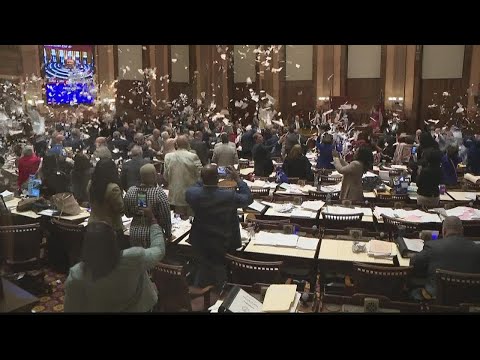 Georgia lawmakers pushed through dozens of bills in a rapid-fire conclusion to their 2022 session on Monday, delivering a tax cut and banning teaching on “divisive concepts” in schools.

But lawmakers did not take up a measure that could have required physical exams before a woman could be prescribed abortion pills, rejected an expansion of gambling and turned down an additional pay raise for themselves.

Some key proposals have already passed, including a mental health reform measure, a loosening of gun laws and a bill letting parents opt their children out of school mask mandates.

Other measures died earlier, including a bill that would raise penalties for illegal acts during protests and an attempt to regulate social media, according to 11alive.

MENTAL HEALTH: House Bill 1013 aims to force insurers to pay for mental health and substance abuse treatment in the same way they pay for other health care. The measure also allows a police officer to take someone for evaluation after getting permission from a physician, instead of arresting them for a crime.

GAS TAX HOLIDAY: House Bill 304, signed into law, suspended the state’s motor fuel taxes through May 31, including a levy of 29.1 cents per gallon for gasoline and 32.6 cents per gallon for diesel. Suspending collections could subtract more than $400 million from road building. The governor plans to use part of last year’s surplus to replace the money.

INCOME TAX CUT: The House and Senate agreed to create what would be an eventual flat 4.99% state income tax in House Bill 1437. The rate would be implemented in steps over a number of years, depending on revenue.

TRANSGENDER ATHLETES: The Georgia High School Association would be allowed to ban transgender boys and girls from playing on the public school sports teams matching their gender identity under House Bill 1084.

CRITICAL RACE THEORY: House Bill 1084 would ban the teaching of certain racial concepts that Republicans say are divisive. Opponents say the measure would frighten teachers away from an honest classroom discussion of race in history and the present.

INCOME TAX REFUNDS: House Bill 1302, signed into law, gives $1.1 billion of income tax refunds including $250 to single filers, $375 to single adults who head a household with dependents and $500 to married couples filing jointly.

GUNS IN PUBLIC: Senate Bill 319 would abolish Georgia’s requirement for a background check and license to carry a handgun in public. Republicans say it infringes on Second Amendment gun rights for people to have to apply for a permit and pay a fee, usually about $75.

VOTING: Senate Bill 441 would allow the Georgia Bureau of Investigation to inquire into election fraud.

PARENT BILL OF RIGHTS: House Bill 1178 would put into one law a number of parental rights that already exist, including saying parents have the right to review all classroom materials.

MASKS IN SCHOOLS: Senate Bill 514, already signed into law, will allow parents to exclude their children from mask mandates.

RIGHT TO FARM: House Bill 1150 would enhance protections for farmers against nuisance lawsuits by neighbors over problems such as odors, giving them protection from most suits after two years of operation.

LAWMAKER PENSIONS: Lawmaker pensions would increase by about 40% under House Bill 824.