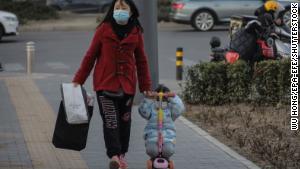 China’s high property prices and rising education costs, especially in big cities, have frequently been cited in surveys as the top factors preventing couples from having more children.

Both sectors have been thrust into the spotlight this year, with the debt crisis surrounding property giant Evergrande and the Chinese government’s sweeping crackdown on the private tutoring industry.

China’s birth rate plummeted for a fifth consecutive year to hit a new record low in 2021, despite government efforts to encourage couples to have more children in the face of a looming demographic crisis, according to CNN.

The world’s most populous country recorded 10.62 million births last year, or only 7.5 births per 1,000 people, according to China’s National Bureau of Statistics — marking the lowest level since the founding of Communist China in 1949.

The number of birthswas just enough to outnumber deaths, with the population growing by 480,000 to 1.4126 billion. The natural growth rate fell to 0.034%, the lowest since China’s great famine from 1959 to 1961, which killed tens of millions of people and led to a population decline.

New births in 2021 dropped 11.6% from 12.02 million in 2020 — a gentler decline than the 18% plunge that year, from 14.65 million in 2019.Chinese demographers have warned that if the downward trend continues, China’s population could stark shrinking soon.

Ning Jizhe, head of the National Bureau of Statistics, told state media Monday the decline in births stemmed from a combination of factors, from “a decrease in the number of women of childbearing age, a continued decline in fertility, changes in attitudes toward childbearing and delays of marriage by young people,” including due to the pandemic.

The plunging birth rate comes as the Chinese government ramps up efforts to encourage families to have more children, after realizing its decades-long one-child policy had contributed to a rapidly aging population and shrinking workforce that could severely distress the country’s economic and social stability.

To arrest the falling birth rate, the Chinese government announced in 2015 that it would allow married couples to have two children. But after a brief uptick in 2016, the national birth rate has been falling year on year, prompting authorities last year to further loosen the policy to three children.

Ning, the Chinese statistics official, said in 2021, 43% of the children born were the second child in a family. He said the three-child policy is expected to gradually add births, and that “China’s total population will remain above 1.4 billion for a period of time to come.”

For decades, local governments forced millions of women to abort pregnancies deemed illegal by the state under the one-child policy. Now, they are churning out a flurry of propaganda slogans and policies to encourage more births. The common incentives include cash handouts, real estate subsidies and extension of maternity leave.

Last year, more than 20 provincial or regional governments amended their family planning laws, including extending maternity leave for women. For example, eastern Zhejiang province offers 188 days of maternity leave for the third child; and in northern Shaanxi province, women can enjoy 350 days paid leave for having a third child, according to state media reports.

But the policies have failed to convince many women, who worry they’ll be further disadvantaged as companies seek to avoid the extra financial burden.

The high cost of raising children is also deterring parents from having more of them, especially among the country’s growing middle class.