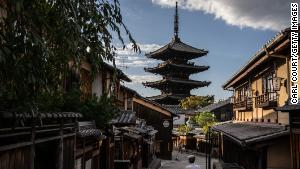 The US Centers for Disease Control and Prevention added even more destinations on Monday to its ever-growing list of places considered to be a “very high” travel risk for Covid-19.Level 4, the CDC’s highest, has now swelled to almost 135 places, illustrating the rapid surge of the Omicron variant around the world. In early January, there were around 80 destinations listed there. Level 4 now has more destinations than all the other CDC categories combined, according to CNN.

The CDC does not include the United States in its list of advisories, but it was color-coded at Level 4 on February 7 on the agency’s map of travel risk levels.Last week, Mexico and Brazil were the most notable of a dozen places added to Level 4.Other tourist favorites parked on Level 4 even longer include Australia, Canada, France, Peru, Singapore and Spain. The United Kingdom has been there since July 2021.

Joining the Level 4 ranks this week are two island nations on opposite sides of the world: Japan in Asia and Cuba, the largest and most populous island in the Caribbean.The other new Level 4 nations are also scattered around various parts of the globe.Armenia is in the mountainous Caucasus region on the far reaches of eastern Europe. The Democratic Republic of the Congo is in the heart of Central Africa while Libya is on the Mediterranean coast of northern Africa. Oman is on the Arabian Peninsula, while Israel is on the Mediterranean shores in the Middle East.The CDC places a destination at Level 4 when more than 500 cases per 100,000 residents are registered in the past 28 days. The CDC advises travelers to avoid travel to Level 4 countries.To recap, this week’s additions to Level 4 are:

Last week, the Democratic Republic of the Congo was at “moderate” Level 2. Armenia, Cuba, Japan, Libya and Oman had been at Level 3, in the “high” risk category.

Israel was added to Level 4 on January 18 along with 21 other destinations and remained there in subsequent updates. However, the CDC listed Israel as an updated entry in Level 4 on Monday because the agency has added information on Gaza and the West Bank. The CDC does not have separate entries in its listing for those.