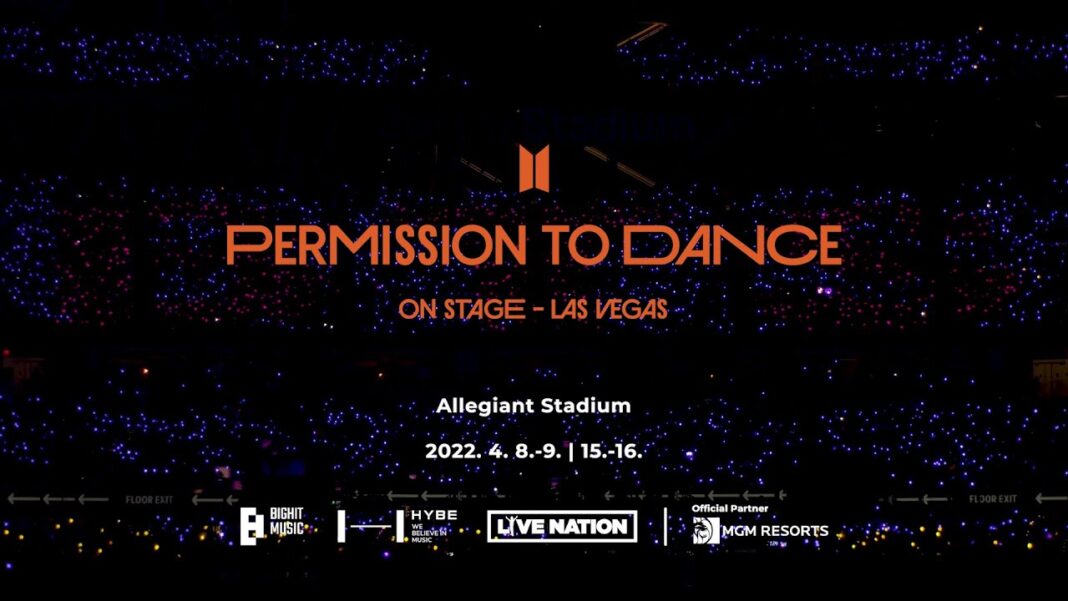 On February 23, Big Hit Music announced on Twitter that BTS would next bring their “Permission to Dance On Stage” concert to Las Vegas at the Allegiant Stadium, from April 8 to 9 and April 15 to 16. The April 16 will have an online live-streaming component. All four dates will also be broadcast live on a big screen at the MGM Grand Garden Arena in a “Live Play” event.

“Permission to Dance On Stage” kicked off in October 2021 with a fully online concert, held at the Seoul Olympic Stadium without an audience due to COVID-19 restrictions at the time. BTS then brought the concert to an in-person audience at SoFi Stadium in Los Angeles over four nights from November 27 to 28 and December 1 to 2.

It was announced that “Permission to Dance On Stage” would also be held for in-person audiences in Seoul at the Olympic Stadium in March 2022. This will be BTS’s first Seoul concert since their “LOVE YOURSELF : SPEAK YOURSELF THE FINAL” world tour in October 2019. It have an in-person audience but there will also be online and theater live-streaming components.

Meanwhile, the 64th Grammy Awards will be taking place at the MGM Grand Garden Arena in Las Vegas on April 3. The Grammys were originally supposed to take place in January in Los Angeles but was rescheduled and relocated due to concerns over the Omicron variant of COVID-19. BTS had been scheduled to fly to the United States for the original date and canceled their flight when it was postponed, but the group is expected to attend the rescheduled date. The group has been nominated at the Grammys for the second consecutive year.