For the first time in Olympic history, two robots completed an underwater torch relay on Wednesday afternoon in Beijing.

The torch relay for the Beijing 2022 Winter Olympic Games started on Wednesday, just two days before the official opening of the Games. Some 1,200 participants will carry the flame across three competition zones from Wednesday to Friday.

According to the developers, the special underwater torch looks very much like the Feiyang torch design. The Beijing 2022 Olympic torch, named “Flying” (Fei Yang in Chinese), features a striking inner red “blazing ribbon” that contrasts with a second ribbon that is silver-plated on the outer edge of the torch.

According to CGTN,at the Beijing Winter Olympic Park, torchbearer No. 254 An Guoyu handed the flame to an amphibious robot shaped like a curling stone, which then moved to a hole in the frozen Yongding River, descended into the water, “swam” to another submersible robot and passed the flame to it. 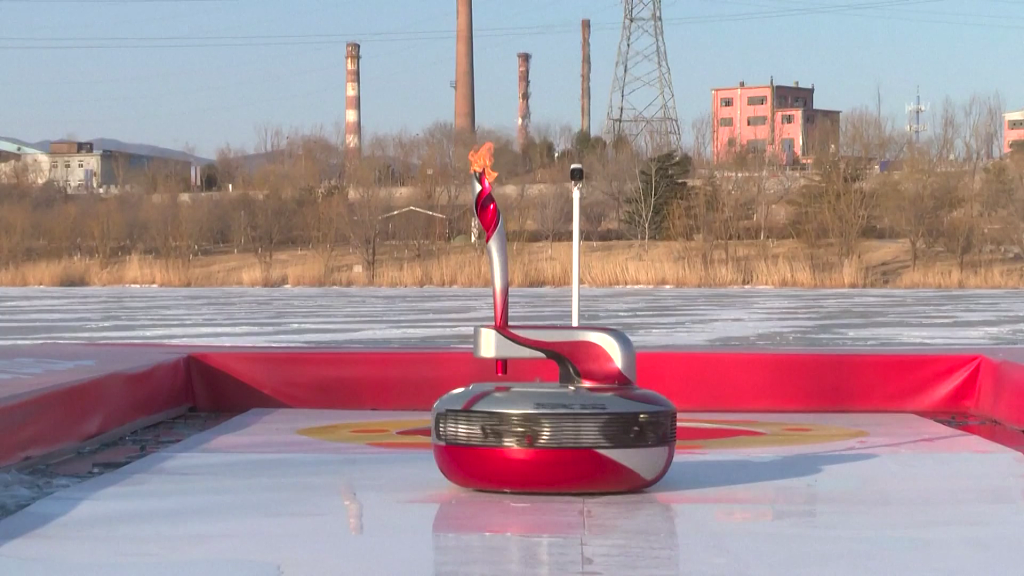 An amphibious robot, one of the two robots to perform the underwater torch relay, moves on the frozen Yongding River in the Beijing Winter Olympic Park, February 2, 2022. /CFP

The second robot then lifted the flame out of the water and passed it to the 255th torchbearer, An Yixiang, marking a successful operation. 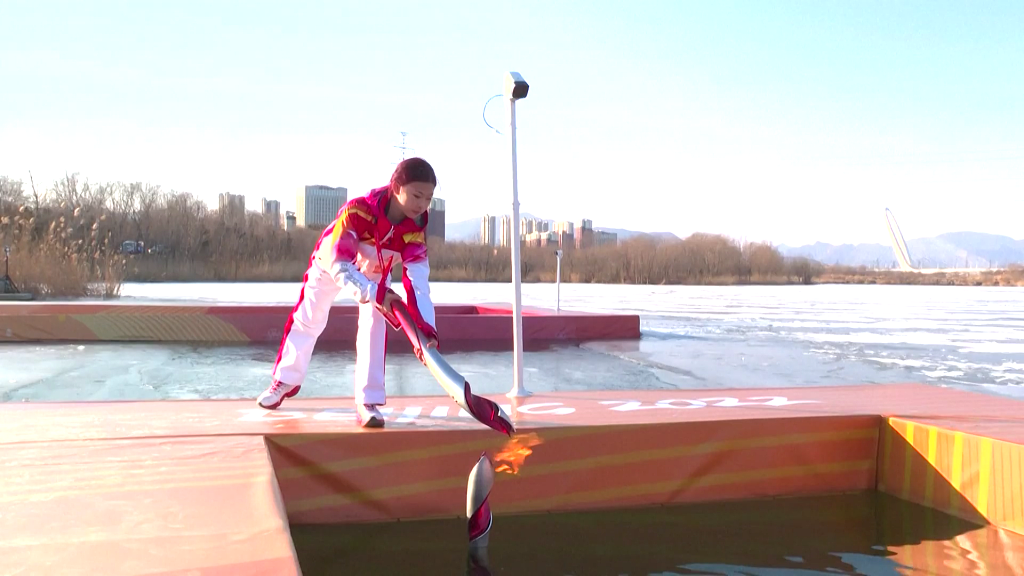 The second robot passes the flame to the 255th torchbearer, An Yixiang, in the Beijing Winter Olympic Park, February 2, 2022. /CFP

The underwater flame of the torches in the Beijing Olympic relay adopted a special smoke-free environmental-friendly gaseous fuel, and designers with the 31 Research Institutes of the Third Academy of state-owned space giant China Aerospace Science and Industry Corporation (CASIC) said that it is just another example of the high-tech and green and clean characteristics that China has promised to the world for the 2022 Beijing Olympics.

Compared to the foreign underwater torches that were lighted with polluting solid fuel, the one for Beijing 2022 Winter Olympics overcame designing difficulties and adopted gaseous fuel that is smokeless and free of pollution, they said. 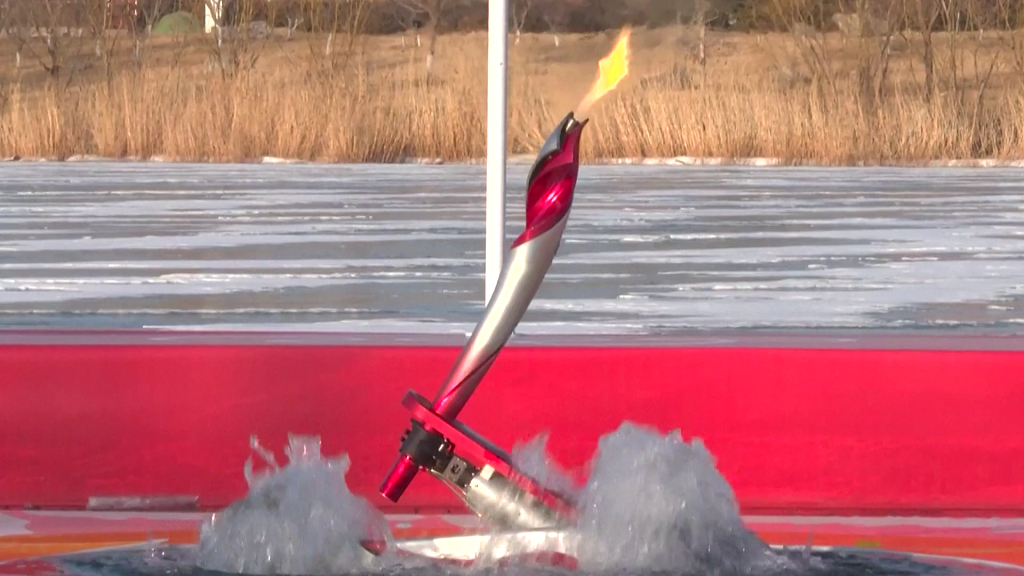 An amphibious robot, holding the Olympic torch, descends into the water in the Beijing Winter Olympic Park, February 2, 2022. /CFP

Li Chunguang, director of a key laboratory with the research institute who oversaw the project, said that to enable the flame to keep burning when the torch goes underwater, the designers had to overcome challenges such as sustaining the temperature and pressure differences between the two different mediums of burning.

Li and the designing team compared the special combustors inside the torch for the underwater relay to those in a small liquid or gas propellant rocket. 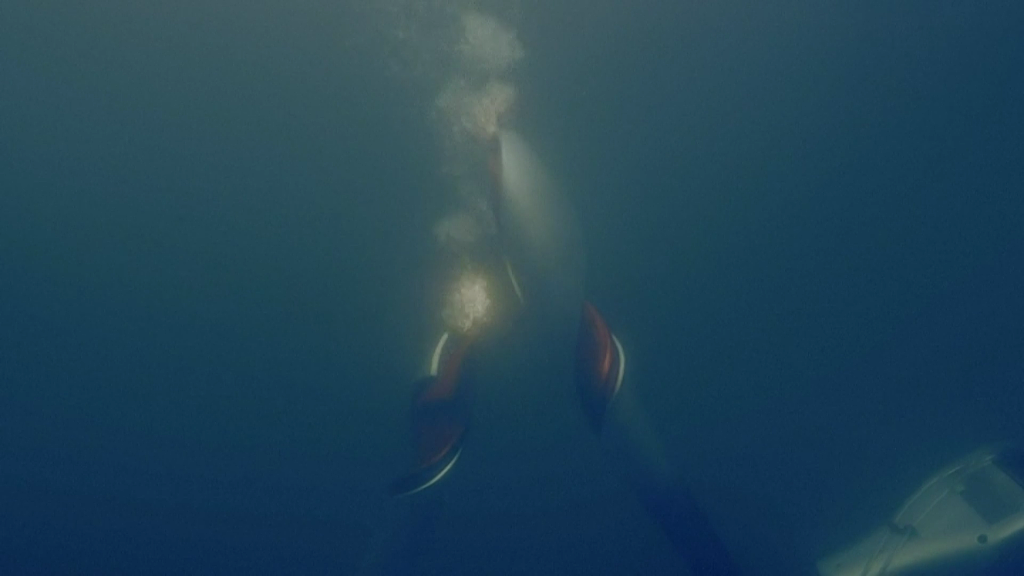 The amphibious robot passes the flame to another submersible robot in the water in the Beijing Winter Olympic Park, February 2, 2022. /CFP

Zhang Bo, torch team technical leader with the CASIC, said that the gaseous fuel torch has two advantages. Primarily, it is clean and does not produce a lot of white pollutants like solid fuels, making it environmentally friendly.

The second is that the gaseous fuel torch has a floating feeling, presenting a tongue of flame. Its form and color are closer to a normal flame. So, the effect of this flame will float more than the previous underwater torch, making it more agile and beautiful, he noted.